Recommended For: Readers looking for a dark new perspective on a childhood tale, fans of having your heart ripped to pieces.

I first saw this book showcased on the shelf when I was working at Barnes & Noble. I was immediately intrigued and drawn in by the illustration on the cover. I thought to myself, “That looks like Peter Pan!” and lo and behold, it IS Peter Pan! Kind of…

Based in our modern world, Peter searches for children needing an escape from their brutal lives. Peter finds the desperate children, the ones grasping for any sense of light in a dark world. Peter waits until the opportune moment to reveal himself, knowing that at that time the children are most likely to follow him into the “paradise” he promises. However, as these children follow Peter they find that this paradise he promises is really a terrifying wilderness filled with things from your worst nightmares.

As time progresses, the children learn that this world, the world of Avalon, is slowly dying. Peter is dedicated to saving this world, his paradise, and the Lady that lives there. Peter believes the only way to save his world is to amass an army of children called the “Devils” to fight for the land he loves.

A little disclaimer: This story is NOT for children. It is NOT the story of Peter Pan from your childhood. It is harsh, sadistic and at times over the top. The children (and they are children) swear, maim and kill and they are tortured and killed in gory detail. That being said it is also one of the best books I have ever read.

Brom completely re-imagines the tale of Peter Pan, turning it into a thoroughly detailed and layered story. Avalon was once a magical and beautiful paradise, until man showed up on its shores. The “man” in question being the Captain and his crew (saw that one coming, didn’t you?) The crew is made up not of not savage men, but puritans (but really, what’s the difference?) looking to start a new civilization. As the story progresses these men do turn into beasts but the Captain remains whole and the reader gains a glimpse into his mindset. The question of who (or what) is evil is presented and as a reader I found myself wavering between the two, into an almost gray area. Brom tells the tale of horror, betrayal and dedication through a child narrator named Nick, a narrator I quickly fell in love with. Nick is a strong minded boy, who attempts to stand up for what is right while shirking away from what would be “easy.”

Although this was one of the best novels I have ever read I do admit that some parts were not so perfect. Most of the characters are extremely developed and layered with a detailed back-story. However, the character Uthger is barely fleshed out though he pays a very important part in the overall story. Also, I did not enjoy the ending. At all. I can’t go into much detail here but I will say that overall it felt rushed. The whole story leads up to this final act and suddenly it is over with no pretense. I do understand why the book ended in this way, but that doesn’t mean I have to like it! 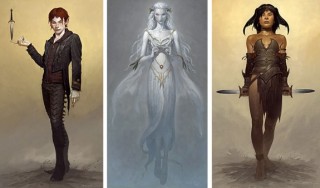 Check out Brom’s website for a gallery of his amazing illustrations, many found in The Child Thief!

4 thoughts on “Review: The Child Thief by Brom”