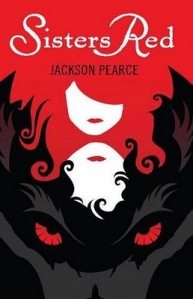 Recommended For: Readers looking for a different view on the story of Little Red Riding Hood filled with strong heroines and viscous villains.

Scarlett March lives to hunt the Fenris–the werewolves that took her eye when she was defending her sister Rosie from a brutal attack. Armed with a razor-sharp hatchet and blood-red cloak, Scarlett is an expert at luring and slaying the wolves. She’s determined to protect other young girls from a grisly death, and her raging heart will not rest until every single wolf is dead.

Rosie March once felt her bond with her sister was unbreakable. Owing Scarlett her life, Rosie hunts ferociously alongside her. But even as more girls’ bodies pile up in the city and the Fenris seem to be gaining power, Rosie dreams of a life beyond the wolves. She finds herself drawn to Silas, a young woodsman who is deadly with an ax and Scarlett’s only friend–but does loving him mean betraying her sister and all that they’ve worked for?

I love fairy tale rewrites and I love that this was loosely based on Little Red Riding Hood. However, I did not love this book. I wanted to, really! Looking back, I think that the reason I didn’t love it was because I had a hard time loving the characters. I found Scarlett to be obsessive and resentful for saving her sisters life, I found Rosie to be so naïve and annoying in the way that she couldn’t follow her own desires because they conflicted with her sisters. I found Silas to be a coward and honestly kind of a jerk in the way that he falls head over heels for his best friend’s sister and then manages to not tell her, even though they are living in the same house. The love triangle bothered me the most, Silas pushed Rosie to follow her heart while trying to tell Scarlett her heart’s desire was wrong. I can’t even get into what bothered me the most about this love triangle because it would ruin a shocking and rather infuriating climax that made me want to throw the book against a wall. ::end rant:: That being said, I can give the book credit in relation to its general plot line. It is interesting to turn the Red Riding Hood character into a fighter as she is a weak character in the original story. However, I do think it could have been interesting had the wolf character not been so bad. Perhaps I am a romantic but I like to daydream that the typical bad guy isn’t always bad just as the damsel in distress is sometimes fully capable of saving herself. I also have to say that the ending shocked me, I really didn’t see it coming and that was something that really redeemed the story for me. I realize that my opinion is quite biased and I can really see why some would love this book. I am currently reading Jackson Pearce’s companion novel Sweetly and I have high hopes that I will enjoy it more than I enjoyed Sister’s Red.

One thought on “Review: Sisters Red by Jackson Pearce”