Recommended For: Readers of stories that shoot you straight in the heart

At seven minutes past midnight, thirteen-year-old Conor wakes to find a monster outside his bedroom window. But it isn’t the monster Conor’s been expecting– he’s been expecting the one from his nightmare, the nightmare he’s had nearly every night since his mother started her treatments. The monster in his backyard is different. It’s ancient. And wild. And it wants something from Conor. Something terrible and dangerous. It wants the truth.

From the final idea of award-winning author Siobhan Dowd– whose premature death from cancer prevented her from writing it herself– Patrick Ness has spun a haunting and darkly funny novel of mischief, loss, and monsters both real and imagined.

I heard about this story before it was published through one of the many blogs that I follow and I was very interested in the fact that Patrick Ness was writing a story based off of Siobhan Dowd’s ideas. It looked like a quick and interesting read with amazing illustrations. The illustrations of the monster are perfect as they almost seem to jump right from the reader’s imagination onto the page.

The monster comes to Conor in the dead of night and tells him that he is going to tell him three stories in exchange for Conor’s story, a story of the ominous “truth” that Conor shies away from. The three stories from the monster were my favorite part of the book, they were written almost like fairy tales that at first seemed so cut and dry, until the monster explains the moral which is entirely different from what you had imagined. The conclusion comes when Conor finally succumbs to the monster and tells his own story, the nightmare that haunts him even in his waking hours.

This story was so good. So good that I found myself going through all of the emotions Conor was feeling. I was confused, scared, happy, angry and so sad. As the book came to an end I found myself getting teary over the mere thought of having to go through the loss and heartache that Conor faces. I would recommend this book to any reader looking for a quick, enjoyable read that plays wonderfully with the emotions. 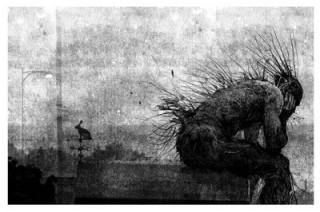 One thought on “Review: A Monster Calls by Patrick Ness”