This is our freebie week for our Top Ten topic so I chose to go with one that has been previously done over at the Broke and the Bookish so I can rave about some of my favorite movies!!


The Princess Bride – I LOVE THIS MOVIE!!!! It is probably my favorite movie EVER and I can quote every.single.line. Also? It’s better than the book! I know, it’s blasphemous to say, right? Tough cookies because if you don’t agree you are crazy and need to go watch it again right this minute… “Have fun storming the castle!”

Harry Potter series – Who wouldn’t have this on their list? I have to admit that as I was watching each movie I was whispering with my sister about what exactly they did different between the book and movie. I mean honestly what were they thinking adding that shrunken Jamaican head hangin’ next to Ernie on The Knight Bus and what about S.P.E.W?! Huge differences and frankly, we were appalled. However these movies are still some of the best adaptations everrr and I love them a lot.

Pride and Prejudice – I love all of the film adaptations and I can’t believe I am saying this but I might actually like the newest version best. This is probably mostly because Matthew Macfadyen as Mr. Darcy was just jaw dropping. Every time I hear him say “I will have to tell you: you have bewitched me, body and soul, and I love, I love, I love you. I never wish to be parted from you from this day on,” I just scream out loud and rewind over and over and over!!

Lord of the Rings Trilogy – Okay I will admit it, I only read the Hobbit and I know that movie isn’t out yet but if it is half as good as the trilogy then it will be epic…and long.

The 3 Musketeers – The Disney version with Chris O’Donnell? Yum. I definitely just bought it via my Disney Movie Club (yes, I am a member of Disney Movie Club) and I watch it every night as I am snuggled in my bed. I remember watching this movie with my brother when it was still ON Disney Channel. It has Charlie Sheen, Kiefer Sutherland and TIM CURRY!! “Rochefort. Isn’t that a smelly kind of cheese?”

Dracula – I pretty much love all versions of this movie (even Dracula: Dead and Loving It) but I have to say that Bela Lugosi is THE man and he is the reason I became obsessed with all things Dracula when I was a wee tyke.

Big Fish – This movie is just beautiful in so many ways. I just recently read the book by Daniel Wallace and it is just as colorful and imaginative.
Game of Thrones – I only just started the first book but so far I am finding the two to be nearly exact and I like it. Though I do feel like I have to get through the first two books before season 2 of the show starts because I am finding myself a bit bored with the first book as I already know what is going to happen. Also: Jon Snow is love.

True Blood – The show is not so close to the book and I find myself not liking Sookie as much as I do in the novels but overall it is pretty awesome and I am highly anticipating the next season as the last season finale was jaw dropping.

Alice in Wonderland – Some people really didn’t like the remake of this film but I loved it. I don’t particularly like Mia Wasikowska but I think she portrayed Alice nicely. Tim Burton was genius as always and Johnny Depp and Helena Bonham Carter were perfect.

Wuthering Heights – This movie isn’t even that good, in fact I remember going to the special “Hollywood at the Bijou” showing with my aunt and literally LOLing at numerous parts throughout because it was so ridiculous. Still love it though!

Stardust – I didn’t read the book (shame on me) but the movie was quite awesome and I am frequently irritated that I can’t get it through Netflix instant stream. 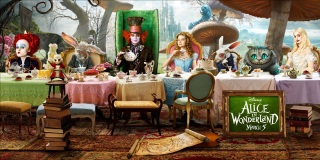