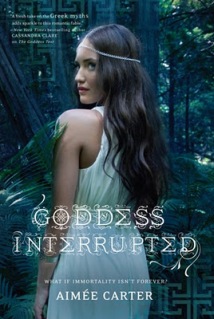 Recommended For: Fans of Greek Mythology and their retellings.

But if she wants a life in the Underworld with Henry, she’ll have to fight for it.

Becoming immortal wasn’t supposed to be the easy part. Though Kate is about to be crowned Queen of the Underworld, she’s as isolated as ever. And despite her growing love for Henry, ruler of the Underworld, he’s becoming ever more distant and secretive. Then, in the midst of Kate’s coronation, Henry is abducted by the only being powerful enough to kill him: the King of the Titans.

As the other gods prepare for a war that could end them all, it is up to Kate to save Henry from the depths of Tartarus. But in order to navigate the endless caverns of the Underworld, Kate must enlist the help of the one person who is the greatest threat to her future.

WARNING: THIS REVIEW WILL CONTAIN SPOILERS FOR BOOK ONE IN THE SERIES, THE GODDESS TEST. I SUGGEST YOU READ THAT BEFORE READING THIS REVIEW!

It has been six months since Kate passed the tests to become Henry’s wife and the queen of The Underworld. It has also been six months since she has seen Henry, six months that she has spent exploring the world with her best friend James. Kate can’t wait to get home and see Henry, unfortunately he isn’t as excited to see her and he barely acknowledges her presence. Kate brushes this aside and decides to go forward with her induction ceremony but right as she is about to be crowned, Cronus, the “father” to the six most powerful Gods begins to break free of his prison and he attacks the group of Gods gathered for the ceremony. It comes to light that Calliope is behind this attack and she is doing everything she can to free Cronus to take revenge on Kate and Henry. Cronus captures Henry, Walter and Philip and Kate decides she has no other choice but to go after them. James and Ava accompany her and they soon realize that they need some serious help from the only other person besides Henry who knows all the secrets of The Underworld, his first wife Persephone.

At first I was a little annoyed over Persephone’s characteristics but overall I really liked her personality and the way she bantered back and forth with Ava. She is a really forward character and knows exactly what she wants. I have to say that for the most part I liked her significantly more than Kate. A lot of the story was focused on Kate struggling with her emotions toward Henry, She knew she loved him but one moment she was leaving because she didn’t think he loved her and the next she was 100% sure that he did. Not to mention the fact that she felt completely inferior to Persephone in relation to every aspect of her life. I felt like she was so stuck on comparing herself to her sister that she couldn’t appreciate her gifts and her strengths as much as she did in the first book. Then there was Henry, I wanted to punch him in the face a few times, especially when SPOILER ALERT Persephone goes to him in his “secret” hideout and they have a LONG reunion in which they keep kissing!!! I understand that Persephone was apparently trying to prove to him that he didn’t love her but are you kidding? They just kept going and going and I had a really hard time liking Henry after that. It just felt like he was settling for Kate because she was devoted to Henry and Persephone was not. END SPOILER I think by the end I was just tired of the back and forth in Kate’s mind and I just wanted some hint of love or emotion from Henry.

I know it seems like I was not satisfied with this book but I really was. It was adventurous and heartfelt and it made me want more. I was SO happy with the ending. The first book ended in a total meh way and that’s what I had expected from this novel as well. Thankfully I was surprised and it was a total I DID NOT SEE THAT COMING moment that really has me anticipating the next book. Despite my frustrations over certain parts of this book it was very entertaining and I recommend it to those liking books filled with conflict, emotion and Greek myths with a twist.

One thought on “Review: Goddess Interrupted by Aimee Carter”