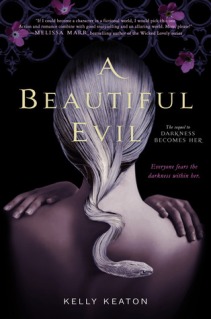 Recommended For: Those who enjoy retellings of Greek mythology with a little paranormal fantasy thrown in.

Myth and mayhem inhabit a richly reimagined New Orleans in this sequel to Darkness Becomes Her. After the epic graveyard battle at the end of Darkness Becomes Her, Ari and her friends know what they’re up against: Ari is facing the Medusa curse and is haunted by the image of what she will become. To make matters worse, the heinous goddess Athena has kidnapped young Violet and is threatening to destroy Ari.

Ari, along with the superhot Sebastian, is doing everything she can to learn more about Athena and to get Violet back. But the battle of good and evil is bigger than she realizes, and she’s about to be pulled into a world more horrific than she could ever imagine…

This is the second book in Keaton’s Gods & Monsters series, it continues where the first book Darkness Becomes Her left off. Ari has started training at the academy and is preparing herself for when she meets Athena the next time, she intends to get Violet and her father back and take Athena down. As the story progresses she does get more than one chance to overtake Athena. However, Athena has a new plan up her sleeve and she uses Sebastian as a new pawn in her game, which leads Ari to make some very hard decisions that may determine the outcome of their entire relationship.

This addition to the series provided more insight to some of the characters while introducing some new faces as well. I was disappointed that Violet was again left a mystery but I found the part of Athena’s back-story to be interesting and I was very intrigued by Henri’s little secret. This novel also shed light on Sebastian’s true self and his relationship with Ari. Both characters are put through significant trials and I was thrilled with the way they both handled each situation.

Unfortunately the book as a whole disappointed me. I found it to be slow paced yet also filled with entirely too much action. I know that seems impossible but Ari kept going after Athena with no plan in place and just thought she could get lucky overcome the Goddess. Each time she failed miserably she turned right around without a plan and went after Athena no better prepared than she was the last time. This made me think of her as extremely immature and though I know this was a fantasy novel it still felt rather silly and unbelievable to me. I am not sure at this point if I will continue reading the series or not.

Much like the first book, I recommend this book to those who enjoy retellings of Greek mythology with a little paranormal fantasy thrown in.

One thought on “A Beautiful Evil”