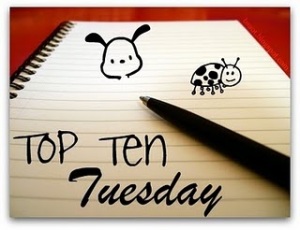 Princess Cimorene from The Enchanted Forest Chronicles by Patricia C. Wrede – The first heroine I ever fell in love with, Princess Cimorene is a not so typical princess who gets to live with dragons!!

Scarlet from Scarlet by A.C. Gaughen – Intricate and a little abrasive, Scarlet is also a strong and extremely skilled knife wielding young lady.

Anita Blake from The Anita Blake series by Laurell K. Hamilton – She is a BAMF!! Plus she has a million boyfriends and lovers and sometimes, it’s nice to have options.

Peter Pan from Peter Pan by J.M. Barrie – This character always intrigued me and I would love to know more of what is inside his head. Not to mention the fact that he can fly and he fights pirates! Ohh…I might want to be Captain Hook instead..

Cas Lowood from Anna Dressed in Blood by Kendare Blake – He hunts ghosts! That is a pretty awesome hobby in my opinion.

Celia from The Night Circus by Erin Morgenstern – I would really love to be able to appreciate her angst, power and overwhelming love for Marco.

Mina from Dracula by Bram Stoker – I really have always wondered about Mina’s side of the story. I have read a few rewrites from her POV and they just never felt right for me.

Hermione Granger from The Harry Potter series by J.K. Rowling – There are just too many reasons to list for this one, it seems like it should be rather obvious :]

Liadan from Son of Shadows by Juliet Marillier – Really I would love being any of Juliet Marillier’s strong female characters but this was my favorite book out of the series and I think Liadan stuck out the most for me out of all of Juliet’s heroines. Plus I really love The Painted Man and their love story touched me the most out of all The Sevenwaters characters.

Lo from Fathomless by Jackson Pearce – She’s a mermaid! I have to add one mystical creature into this list!

Karou from Daughter of Smoke and Bone by Laini Taylor – There are so many things to love about Karou (we won’t even talk about her relationship with Akiva because YUM) but she has interesting relationships with so many interesting beings and she has a past life worth reliving. Plus, blue hair is hot.

Seraphina Dombegh from Seraphina by Rachel Hartman – The world in which she lives is AWESOME (I LOVE DRAGONS) and there is even more awesomeness contained in her head! Plus, I wish I could make beautiful music like she does!

This list was HARD (as you can see I couldn’t keep it to just ten!!) I kept going back and forth because I love SO MANY CHARACTERS and would really love to live in their world if only for a day!! Who did you guys choose for your Top Ten Tuesday?