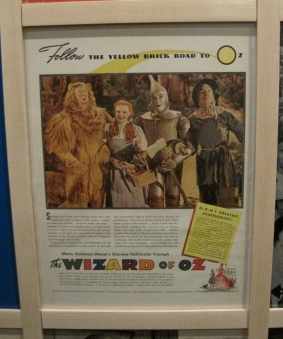 Welcome to Project Fairy Tale! If you want to learn more about this fun event head over to my intro post!

Okay my friends, be prepared because I am about to fangirl all over the place. I will try my best to be coherent but The Wizard of Oz starring Judy Garland is one of my top 5 favorite things in the world. I have loads of print companions to the movie and between those, Oz Wikis and IMDB, I have devoured all of the trivia I possibly could over the years, and before we start I am just want to say that no, there was no suicide on set. While in college I took a film class and studied the film frame by frame and I can tell you with conviction that it is a bird on set and not an “angry munchkin” or the like taking a stand against casting for the film. Okay? Okay. Moving on…

I’m not going to sum up the film because it is unfathomable that anyone would be unfamiliar with it and if you are, stop what you’re doing and go watch it right now. You’re welcome.

Instead we are going to go over some less known fun facts about the movie! 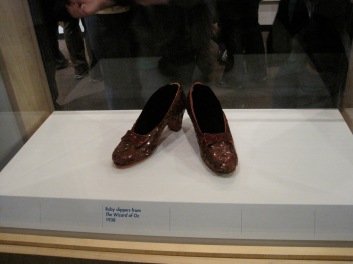 I was lucky enough to visit the pair currently on display at The Smithsonian National Museum of American History! While we were there they told us that they need to replace the carpet in front of the case very often because it gets worn from so many people stopping in front to see the slippers! These slippers were auctioned off in 1970 for only $15,000!! One pair was on display at The Judy Garland Museum in Minnesota but they were stolen in the summer of 2005. Another pair is owned by actress Debbie Reynolds. It is reportedly unknown how many other pairs of ruby slippers there are at this time.

So there it is, as I stated in my review of the original novel, it was not my favorite in the series. I could even go as far as to say that The Wizard of Oz film starring Judy Garland is better than the original novel written by L. Frank Baum. I know every single line and sing the songs at the top of my lungs, I have a crush on The Scarecrow and adore Aunt Em, especially when she says, “Almira Gulch, just because you own half the county doesn’t mean that you have the power to run the rest of us. For twenty-three years I’ve been dying to tell you what I thought of you! And now… well, being a Christian woman, I can’t say it!” You go girl!

In truth, this movie was one of the best things about my childhood.

18 thoughts on “Movie Review: The Wizard of Oz”