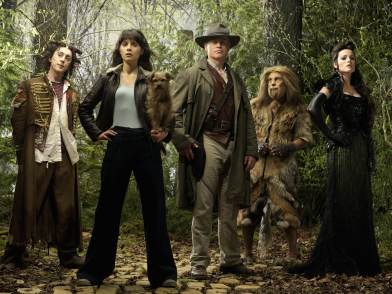 We are nearing the end of Project Fairy Tale and this is my last post on a non-print adaptation of The Wizard of Oz! If you want to learn more about this fun event head over to my intro post!

The plot was so twisty on this one that I don’t want to rehash it for you all because I would rather not ruin anything so let’s talk about the new portrayal of old characters and then go forth to Netflix and watch, I say!

I LOVED what SyFy did with these characters.

D.G. was just the right amount of naivety and intellect to make me enjoy her as a character. Though a lot of her parts were cheesefest and wide eyed shock and concern, I still enjoyed her strength and determination.

Glitch (The “Scarecrow”) was hard not to love, for reasons beyond the fact that he was played by Alan Cummings. He was fun and incredibly loyal even though he “glitched” often due to half of his brain being removed by Azkadellia.

Raw (The “Cowardly Lion”) was first of all, in a magnificent costume and makeup. Second, the way SyFy portrayed him and his kind as sort of telepathic viewers was a really interesting addition. He was the sweetest and most tame of the characters which was a fun comparison to The Cowardly Lion from the original tale. In the end, he came into his own and realized that it was important to stand up for his friends and family.

The Tin Man aka Wyatt Cain – Okay first, those blue eyes *swoons* second, Wyatt and Cain are only two of my favorite names, EVER. Third, HIS INDIANA JONES HAT! I can’t even…okay but his character is THE hero, THE good guy. The one who is all conflicted and wants to “go his own way” but realizes that he has a HEART (see what I did there) and therefore must fight for the GOOD of all. Oh he was my favorite.

Azkadellia – She was beautiful and wicked to the point where sometimes I was a little bit scared of her, but I liked it. She also had a killer wardrobe so what’s not to love?

Things that made me LOL, roll my eyes, and basically remember it was a film made by SyFy:

Toto: I didn’t love their rendition of Toto for this particular adaptation. Spoiler alert: There was some shape shifting involved and I really didn’t like the character who portrayed “Tutor” as a human.

Azkadellia and her boob minions: Yeah, you read that right. Az has some pretty awesome minions, some of which are flying monkeys much like the original story. The major difference here that made me go “did that just happen…” is that Az has some nifty symbols tattooed on her upper chest. Therefore, whenever she is ready to make those babies fly she just unbuttons her little jacket, puffs out her..um..chest, gives a shake and BAM flying monkeys GALORE! I mean really SyFy, I know Kathleen Robertson is a hottie but could you not?

The plot was intricate, interesting and in some parts, very sad. In my opinion didn’t drag at all and I wanted to know what was going to happen next throughout it’s entirety. It is definitely a show that I would watch again and it made me want to watch some of SyFy’s other miniseries! I suggest taking some time and watching this adaptation of The Wizard of Oz, it is on Netflix and is only a few hours long!