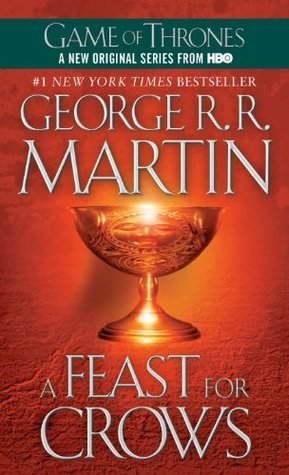 Title: A Feast for Crows

Series information: Book four in A Song of Ice and Fire

Few books have captivated the imagination and won the devotion and praise of readers and critics everywhere as has George R. R. Martin’s monumental epic cycle of high fantasy. Now, in A Feast for Crows, Martin delivers the long-awaited fourth book of his landmark series, as a kingdom torn asunder finds itself at last on the brink of peace . . . only to be launched on an even more terrifying course of destruction.

WOO BOY was this one a bit harder to get through. I still loved it, but after the craziness of A Storm of Swords I just kept waiting for awesomeness to occur. I will go along with everyone else who has reviewed this bad boy and say that I really missed those characters that we don’t see, the BIG NAMES from the previous books. I already started A Dance With Dragons and the second chapter is one of my favorite characters and I had a major sigh of relief upon reading his name. That being said, I did think it was interesting to read about some new characters, and I REALLY enjoyed seeing more of the world created by George R. R. Martin.

There were quite a few moments that made me gasp, particularly with Brienne, and it was very intriguing to be inside the mind of Cersei, she is just a ball of crazy. Other than that, it was a bit more world building and trying not to swoon over Jaime. Littlefinger has proved himself to be the most cunning, though some of us already knew that, and if I am being honest I find those from the Iron Islands to be a bit of a snoozefest. I fell into the world as I always do and have no regretted this read-along for one moment. I am already thinking in dread about the time that is nearing when I won’t have any new Game of Thrones chapters to look forward to. I just send happy thoughts to GRRM and hope that he remains healthy and writing, because 2015 is a very long time away.

And my final thoughts upon completing A Feast for Crows was, of course…

2 thoughts on “Review: A Feast for Crows by George R. R. Martin”