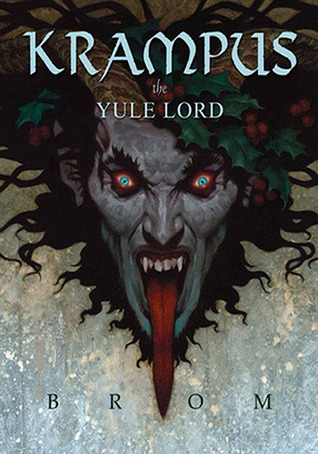 Recommended For: Fans of dark fantasies, mythologies of all kinds, and the other side of Christmas.

One Christmas Eve in a small hollow in Boone County, West Virginia, struggling songwriter Jesse Walker witnesses a strange spectacle: seven devilish figures chasing a man in a red suit toward a sleigh and eight reindeer. When the reindeer leap skyward, taking the sleigh, devil men, and Santa into the clouds, screams follow. Moments later, a large sack plummets back to earth, a magical sack that thrusts the down-on-his-luck singer into the clutches of the terrifying Yule Lord, Krampus. But the lines between good and evil become blurred as Jesse’s new master reveals many dark secrets about the cherry-cheeked Santa Claus, including how half a millennium ago the jolly old saint imprisoned Krampus and usurped his magic.

Now Santa’s time is running short, for the Yule Lord is determined to have his retribution and reclaim Yuletide. If Jesse can survive this ancient feud, he might have the chance to redeem himself in his family’s eyes, to save his own broken dreams, and to help bring the magic of Yule to the impoverished folk of Boone County.

You might remember that a while back, I read and LOVED The Child Thief, a retelling of Peter Pan, written by Brom. Despite my love of the author/artist, it somehow passed by me that he was writing a story about my favorite Christmas demon, Krampus. I was walking through Barnes & Noble last year and saw the cover and HAD to have it, I read it over two days while snowed in from a terrible storm, and it was an absolutely perfect experience.

One of the most interesting aspects of this novel is the way in which Brom blends the line between traditional fantasy elements, and contemporary issues. Small town problems such as drug addiction and trailer park romances meld together with Norse lore and Yuletide demons. In this sense, there is darkness in the character of Krampus, he is, after all, seeking to murder Santa Clause and take back his right as the reason for the season. Beyond that, Brom explores the darkness of humanity, there are many twisted characters who partake in abuse, addiction, and torture, but there is hope throughout as well.

One of my favorite thing in literature is when an author writes multilayered characters. Characters who are neither good nor evil, but fall somewhere in the middle of the spectrum, and that was completely Krampus for me. Looking at the cover of the novel you expect this character of the “Christmas demon” to be a completely evil and harsh in the light of something as lovely as Christmas, but he wasn’t. Instead, I found Krampus to be understanding and just, I really do think that he believed he was right in his claims.

It wasn’t just the story and illustrations that spoke to me, some small details of this novel were reminiscent of my childhood which made me really fall deeper into the novel. For example, Jesse tells Isabel that he is going “snipe hunting,” and the inclusion of the Shawnee characters, who are part of my ancestry really spoke to me. At one point, Krampus teaches some girls that they should honor him by leaving their shoes outside with a treat or trinket inside them as tribute. My family is from Germany, and my grandmother raised us to leave our shoes out with something such as a coin, or piece of fruit for Krampus, when he comes with Saint Nicholas. We did this every year and were always please to find that Krampus left us gifts of our own. In our household, we held Krampus as high as we held Santa, which was in the front of my mind as I read the novel and the stark differences between the two characters.

Brom writes a beautiful novel, he really has a way with words, and the illustrations are breathtaking and one of a kind. Upon finishing, I was positively giddy over the perfection that is Krampus. For personal reasons this book spoke to me on a different level, and as always, Brom succeeds in simultaneously breaking and melting my heat. For readers looking for a dark and harrowing story on the origins of Santa Clause, differences between Christmas and Yuletide, or a vivid novel steeped in Norse mythology, this novel is highly recommended.

4 thoughts on “Review: Krampus by Brom”