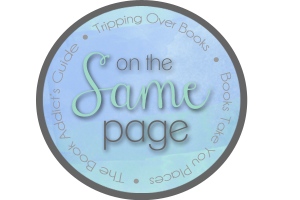 As I was reading The Lies of Locke Lamora I couldn’t help but notice the truly wonderful friendships throughout the novel. The banter between the characters and the way they play off of one another was truly my favorite part of the whole story.Though I adored the Sanza brothers and their newest initiate, Bug, it was the friendship between Locke and Jean that really stood out throughout. There was real angst and heartbreak when one thought the other was in trouble. Real worried thoughts and guilt when one knew he was keeping the other waiting and knew he would be worrying. Real love and loyalty and camaraderie that is not easy to find. It was really endearing, and they were very fun to watch together. With that in mind, I have decided that for this On the Same Page post I am going to focus on some other literary bromances that I really adore.

Robin Hood and Little John – When talking the novel over with Amy and Brittany, one of the things we all noticed that Locke and Jean are very “Robin and Little John-ish.” Many other people have made this connection as Locke and Jean are master thieves who do indeed steal from the rich, they do not, however, share their gold with the poor. Like Locke and Jean, Robin Hood and Little John stand together always, they look out for one another and trust each others instincts and judgement. I also think that the pairs coincide as Locke is a lot like Robin in that he is a bit stubborn and feels that since he is the brains behind the operation he knows best. Jean is like Little John in that he is the brawn of the duo, and uses his special skills to protect Locke when he has gotten in over his head.

Sherlock and Watson from The Adventures of Sherlock Holmes by Sir Arthur Conan Doyle – Oh could a pair be more dissimilar and yet so perfectly matched? Sherlock and Watson both have their own pretty serious issues. One of them is a self proclaimed sociopath and one of them can be argued to seek out high risk situations just to soothe something broken inside of him. Arguably, the only thing the two have in common is one another. The new adaptation really focuses on their relationship and shows how special it is. From saving one another’s lives to delivering a killer best man speech, this bromance is one of my favorites. You can honestly feel the love between these two and it is unique and raw and beautiful.

Harry and Ron from The Harry Potter series by J.K. Rowling – Well, obviously. Look, I am not a crier, and I teared up over some moments in the books, but during the movies? I cry every time Ron, Harry, and Hermione meet up after a long summer apart. Every. Time. They’re so happy! They go through so much together, each growing in their own way and it is no question that Ron is incredibly important to Harry as their friendship is really one of the few stable things in his entire life. Also, per the golden egg in The Goblet of Fire, Ron is the thing Harry will “surely miss,” and how adorable is that?

Frodo and Sam From The Lord of the Rings trilogy by J.R.R. Tolkein – Sam is…well Sam is the best. He shoulders every burden of Frodo’s that he can, taking care of him and rescuing him when he is in danger…a lot. Literally everything Sam does is out of loyalty and love to Frodo. You guys, Sam carries Frodo up a mountain…a mountain named Mount DOOM. Come on now.

Jon Snow and Sam from A Song of Ice and Fire by George R.R. Martin – There is so much to say and yet not enough I can divulge unless I want to give away major plot points. Being that I refuse to spoil I must just say that in the beginning, it was Jon who saved Sam, and as time passed, it was Sam who saved Jon. It is not saying too much to remind you that Sam isn’t the best fighter, and he is an easy target for bullying. Well, Jon made sure that didn’t last too long and he does his best to help Sam find his place. As time goes on, it is Sam who must save Jon, from himself and from others. I can’t say anymore but it is Sam who changes Jon’s life, It is important to note their brotherhood that they found upon going to the wall and losing their family by blood.

One thing I noticed while writing these friendships is that in each duo, the two friends are really quite different from one another. There is one who is the brains of the operation, he is also the stubborn character who can’t always see reason when his plans don’t work out as he had hoped. The other is the one who carries the weight of the type A personality, they clean up the messes and see a side of their teammate that most others do not see. As these bromances go, this clearly works out perfectly, they balance each other out! Who is your favorite bromance?

As always, don’t forget to check out Amy’s post on thieves and Brittany’s post, “The Gang’s All Here“!

8 thoughts on “On The Same Page: The Lies of Locke Lamora”