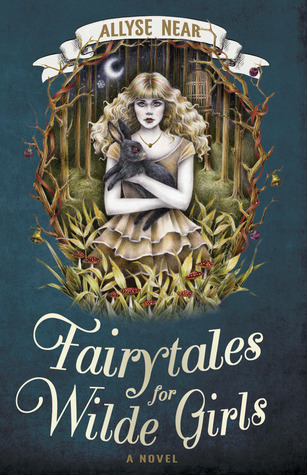 Recommended For: Fans of darker fairy tales filled with descriptive imagery, fans of Neil Gaiman, and fans of books that are much more than what they seem.

Fairytales for Wilde Girls was unlike anything I have ever read before. It was dark, and deep, and sad while simultaneously maintaining ribbons of hope and stolen moments of happiness. It was a novel of self discovery and it was the dark overtone of the novel that really assisted the snippets of light to shine through. One of the most outstanding things about Fairytales of Wilde Girls was the language and use of metaphor by the author. Allyse Near has such a gift in the way in which she conveys every moment with lyrical and descriptive language, it really heightens the novel and sets it apart from other pieces of literature. That being said, some of the quotes throughout the novel really stuck with me and I wanted to share their beauty with you guys! I made up some nifty little images to go along with a few quotes that I really loved, take a peek!

REQUIESCAT by Oscar Wild, thought to be written for his sister Isola Wilde after her untimely death. The poem parallels many of the traits and happenings associated with the main character of Fairytales for Wilde girls, also named Isola Wilde.

From the text: “‘Hmph,’ she snorted derisively, folding up her knees to perch on Isola’s bed. ‘Listen to me, Isola. The original Beauty’s just an encouragement to young women to accept arranged marriages. What it’s really saying to impressionable girls is, “Don’t worry if your new husband is decades older than you, or ugly, or horrid. If you’re sweet and obedient enough, you might just discover he’s a prince in disguise!’’
Mother’s Most Lasting Advice:
‘Never be that girl, Isola. Never pick the beast or the wolf on the off-chance he won’t devour you.”

Possibly my favorite chapter throughout the novel, Near uses the most intriguing imagery when she turns the fairy tale upside down. The chapter begins with the sentence, “A fairytale in reverse,” and ends with “Royalty’s a thing of the past. The kingdom chooses their monarch. Naturally, they elect a wolf.” I love it so much!

One of my favorite descriptions throughout the novel, describing Edgar, the boy next door, whom Isola fondly called “Edgar Allan Poe.”

One of my favorite parts of the novel, during a very endearing moment between my two favorite characters.

Such a different sort of ending, though I have hopes that they did indeed live happily.

I hope that you loved what I offered to you guys today, and please don’t forget to check out Amy and Brittany’s posts also featuring Fairytales for Wilde Girls by Allyse Near! If you haven’t picked this one up yet add it to the pile, it is really a unique and gorgeous read! Don’t forget to read all about darker fairy tales on Brittany’s blog, and some amazing pins featured on Amy’s blog!!

6 thoughts on “On the Same Page: Fairytales for Wilde Girls”