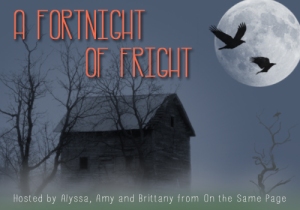 Today we have my dear friend Lauren helping you all out with some not so creepy Halloween recommendations!! Though Halloween is indeed my favorite since I love being scared (and the Halloween decor is the type that I keep up all year round) I still know that a lot of you don’t love the whole horror vibe! So I am going to let Lauren take it away and help you guys out with some things to read, watch, and eat!!

I have to say, I think it’s kind of funny that I ended up here on Alyssa’s blog, with my post full of non-creepy Halloween things. Alyssa is probably the first person I think of when I think of scary things, skulls, and anything else along those lines (that I tend to avoid). Regardless, I’m happy to be here on her blog because Alyssa is one of my favorite people even though she’s like the Lucille Bluth-iest.

SO today, I’m here to share some Halloween fun from a person who usually doesn’t get into the scary, horror-filled books or movies of the season. I love fall more than most people (my birthday and football and pumpkin things!), but just… not the scary stuff. My mom is the complete opposite so it’s kind of weird that I turned out this way. Regardless, here are my picks for how to enjoy the Halloween vibes of October without getting scared.

I’m not opposed to being scared every once in a while, but horror or mystery books are usually not the first ones I reach for. Fall is a great time for getting a little creeped out by what you’re reading… but I usually prefer not to be looking over my shoulder thinking there’s a ghost. (Reading in the dark apartment while my boyfriend is asleep makes me too nervous sometimes.) I’ve curated a list of books that are FAIRLY creepy or have a cool mystery/thriller vibe to them, but probably won’t cause you to be afraid of the dark. I also included a TBR of some of the books I hope to read this season. In addition to all of the Halloween-y books, I included some movies and recipes to get you in the spirit!

Shadowlands by Kate Brian | I asked for this book for Christmas because I LOVED Kate Brian as an actual young adult, and I was determined to keep reading her books. They’re generally kind of creepy and follow a mystery and/or murder theme sometimes. This one, however, was too creepy for me to pick up right away. It involves a serial killer and I really had to convince myself to pick it up. I’m SO glad I did, because the trilogy was awesome. I don’t want to spoil anything, but if you’re generally NOT a scary-book kind of person, there’s a bit of a switch in books two and three that you’ll probably like more. They get less creepy in some ways.

Get Even by Gretchen McNeil and The Secrets of Lily Graves by Sarah Strohmeyer | I have to admit that these two books weren’t my favorite, but they were entertaining mysteries that I’m glad I read! Get Even is the first of two books in the duology that involves a group of girls tracking down a murderer in their school. The Secrets of Lily Graves also involves a murder mystery, along with the creepy fact that Lily’s family works in a funeral home.

Dangerous Boys and Dangerous Girls by Abigail Haas | Dangerous Boys really messed with my head! I read the whole thing in a day while sitting on the beach, so I have to say I didn’t get as scared as I could have. It gets inside the mind of some pretty crazy people. I still have to read Dangerous Girls. The two books aren’t in a series but I’ve heard that they’re similar thrillers.

Trial by Fire by Josephine Angelini | I LOVED this book but still haven’t managed to read the second one yet. This is about a girl who discovers she’s a powerful witch in another world. Witches are incredibly Halloween-y, right?

Miss Peregrine’s Home for Peculiar Children and Hollow City by Ransom Riggs | I honestly didn’t expect to love the first book as much as I did! It was so interesting and atmospheric. I loved how it managed to be creepy without being scary, if that makes any sense. I can’t wait to continue the series this October with the second book! (And the third just came out!)

The Darkest Part of the Forest by Holly Black | I’m pretty sure that any book by Holly Black would be appropriate during October. If you like really strange books with crazy creatures and fae, I highly recommend this one. She has such a cool writing style and the story really drew me in.

They All Fall Down by Roxanne St. Claire, What Waits in the Woods by Kieran Scott, and Ten by Gretchen McNeil | All of these books essentially involve a serial killer of some kind. I even own all three of them, so I really have no excuse for why I haven’t read them yet. I know that these murder mystery books tend to be pretty creepy, so maybe they’re geared towards those of you who have a higher tolerance for scariness. Ten is a retelling of Agatha Christie’s And Then There Were None, which I LOVED in high school, so I’m eager to check it out. Kieran Scott is the real name for the author I know and love as Kate Brian, so I have to read What Waits in the Woods.

Far From You by Tessa Sharpe | I’ve heard nothing but great things about this psychological, diverse read. I even checked it out from the library once but was too afraid to crack it open! One of these days…

Hotel Ruby by Suzanne Young | I’ve loved every other book I’ve read by Suzanne Young, so I have to get to this one immediately. It comes out in November and seems to be just eerie enough for October. It involves a strange and mysterious hotel, so that definitely reminds me of one of my favorite Disney Halloween movies: Tower of Terror. (More info on that below!)

The Diviners by Libba Bray | Now that the sequel is finally out, I think I’m ready to read the first one! I absolutely loved the Great and Terrible Beauty trilogy, which I am due for a reread of, so I’m very interested to read more from Libba Bray. This is a historical murder mystery with some paranormal elements and I’ve heard nothing but great things about it. I usually don’t go for historical fiction, but Bray has proved me wrong in the past with her other series! (I think I usually only like historical fiction when there are some fantasy elements involved.)

Halloweentown movies and Tower of Terror (Disney movies) | Like most people, I love Halloweentown. The second movie was okay and the third one was not necessary… but I still have to watch all three every year! They’re definitely kid-oriented, so if you for SOME WEIRD REASON haven’t already seen these, DO IT and you won’t be creeped out at all. Tower of Terror is totally a sleeper hit but I love it. It’s cheesy but features a young Kirsten Dunst exploring a haunted hotel with her uncle, Steve Guttenberg. The best. I also am a big fan of Twitches.

It’s the Great Pumpkin, Charlie Brown | I’ve watched this every year since I was a kid and I don’t plan on stopping anytime soon. It always takes me forever to find it for some stupid reason. They should play it every day in October so I can enjoy it whenever I remember that I need to watch it.

Young Frankenstein | This is an old movie that my mom used to make me watch. I haven’t seen it in a few years, but I really want to track it down this year! It’s not too scary as an adult, but it definitely freaked me out as a kid. It’s about Dr. Frankenstein’s grandson performing the same experiments.

13 Nights of Halloween on ABC Family | The 13 nights of Halloween features plenty of kid-friendly Halloween shows and movies for the faint of heart. I always go through and record the things I’m interested in because I’m terrible about watching shows live. This year has some other great movies, like Harry Potter, Casper, The Addams Family, and The Nightmare Before Christmas. I unfortunately am a weird person who doesn’t like Hocus Pocus like everyone else does, so I didn’t highlight that here. It also is happening during the 13 nights of Halloween, don’t worry.

I am not a chef by any means and my desire to cook will usually last for about a week before I resort to the same old dinner recipes. As a Pinterest creeper, I constantly see Halloween treats that look creepy and delicious at the same time. If you search “Halloween” on Pinterest, you’ll definitely see some gross recipes that look like actual brains. I steered clear of those and will highlight a few that I think I’ll try out this year!

Pumpkin Dip | I am definitely a pumpkin-obsessed person in the fall. I won’t lie to you, the pumpkin spice coffee really gets me going. This pumpkin dip looks so good and seems really easy. This recipe is actually VERY similar to an easy pumpkin pie recipe that I use for Thanksgiving. Also, those vanilla wafers look too good.

Harvest Trail Mix | I know that candy corn is a VERY polarizing subject, but I’m here to say that I like it. Okay? Okay. This trail mix looks really good and super festive. It involves candy corn, pretzels, bugles, Chex Muddy Buddies (my favorite), Honeycomb cereal, and M&Ms. I think this would taste even better with Reese’s Pieces instead, but that’s me…

Dracula’s Dentures | I don’t know why I’m so obsessed with this recipe, but it looks so good. You essentially make chocolate chip cookies, cut them in half, frost them with red frosting, sandwich mini marshmallows in between, and add almond slivers for fangs. Done deal.

I hope all of you scaredy-cats found something fun to read, watch, or make for Halloween! Thanks Alyssa for hosting me on your blog, even though I’m talking about non-scary things that don’t appeal to you as much 😉

4 thoughts on “Fortnight of Fright: Not As Creepy Halloween Recommendations by Lauren”