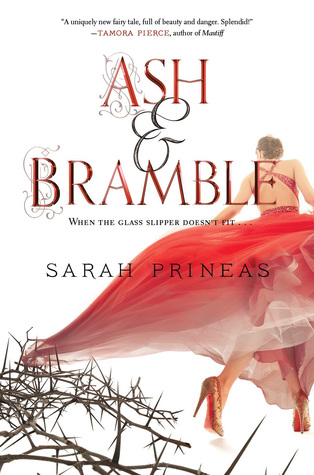 Source: Received an ARC for review from the publisher via Edelweiss

I almost didn’t review Ash & Bramble because I have been feeling such frustration over the disappointment I had upon finishing. This book had so much promise, excellent writing fitted with a dark and twisty fairy tale retelling seemed like it would be a wonderful experience for me. Unfortunately, the novel didn’t just fall flat, but it frustrated me to no end. I will say that this novel was interesting and fast paced, Sarah Prineas writes eloquently and I wanted to love this novel so much for so many reasons. Unfortunately, I had a very hard time relating to our main character, Pin. However, due to her being an unreliable narrator I think that it isn’t unexpected that this was the case. It somehow frustrated me more that the secondary characters such as Shoe, were more likable and interesting than our main gal.

Throughout this novel there were continuous hints to the “before” and I needed more from that. I almost felt as if the novel was half finished, and to be honest the romance was not something that I fell into at all. I somewhat irrationally judged our male lead for liking Pin so much because I felt like she was so standoffish and somewhat rude. I like the dark parts to the plot, I liked the concept, but overall it just didn’t work for me. To be quite honest if this was the first in a duology I would probably be making excuses and saying that things were just getting fleshed out with hopes that we would learn answers to ALL THE THINGS in book two. Unfortunately this is not the case, so I was left very disappointed in the end.

Shelf Talker: The more time that has passed since I have read this novel, the more frustrated I have become. I felt that many parts of the novel were disconnected and though the ending was satisfying in a way, it still made me angry. The ending was conclusive for the most part, but on the other hand, it seemed very much like there could (ahem, should) be a sequel to explain some very open plot threads. I have just recently learned that there is to be a companion novel that takes place 50 years after the ending of Ash & Bramble. I can’t imagine how it will answer questions that I have, it seems as if a prequel would have been more helpful in answering my inquiries. I will say that there are many who absolutely adored this novel so as always I suggest you read other reviews and maybe give it a go yourself!