Hi, friends! Today we have Lindsey (aka Bangs) showcasing her feature Book People Talk Movies! She is chatting all about The Lost Boys, and has made me want to go home and watch this immediately! Take a look at what she has to offer and head over to Amy & Brittany’s blogs to see who they have featured today! Don’t forget, we are hosting wonderful bloggers & authors for two whole weeks with recipes, book recommendations and a lot more awesome! 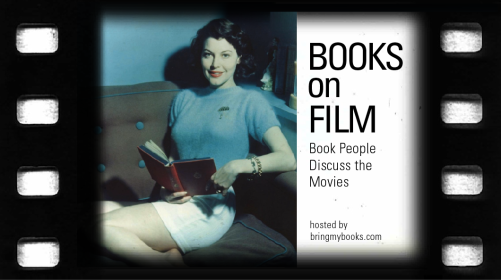 For info on my feature over on Bring My Books, Book People Talk Movies, click here!

I’m so excited to be able to do a guest post about one of my favorite …”horror” movies (read the whole thing before you judge my use of the word horror, haha!)

I can’t remember the first time I saw this movie, but I remember being immediately enraptured by every single scene. The whole thing is so quintessentially 80s I just can’t even (if you know me then you know how I LOVE the 80s!).

I’ve never personally been into horror movies, considering The Craft one of the freakiest movies I’ve ever seen (seriously, nightmares for weeks). I will gladly take a rom-com or a period piece over a scary movie any day – so I always find it surprising when I end up liking (or in this case, loving) a movie that is billed as “scary” or “horror” in any way.

Now I know some of you are thinking “Hey now, I’ve seen this movie …” (well, I hope some of you have seen this and are thinking this…) “…and this is seriously just not a horror flick.” And maybe, by today’s standards anyway, you’re right! BUT, I’m talking about this movie in the way it was intended to be talked about when it was released in the summer of 1987 (just a few months after I was born!), and at that time it was deemed a blend of humor and horror. It’s also relevant to note that it did win a Saturn Award for Best Horror Film in 1987….

The basic plot is as follows: two teenagers move with their mother from Arizona to California, eventually becoming wrapped up in a deadly game of cat and mouse with a gang of young vampires (but I mean, they’re always young, seeing as how they’re vampires and all…).

Doesn’t exactly seem like something to get all worked up about, does it?

THAT IS WHERE YOU ARE WRONG.

Not only does the cast have incredible chemistry, but the cinematography is, in a word, awesome. It has this dark, spooky, atmospherically gothic feel throughout, and you find yourself perpetually on the edge of your seat. Because the vampires are definitely the bad guys here (no sparklies to be found, sorry ladies), we don’t get into the vampire lore too much – the movie is content to leave them as the spooky undead and it works quite well.

Oh, and back to the actors and their chemistry for a second … we’re talking some serious 80s powerhouses in this film: Kiefer Sutherland, Jason Patric, Jami Gertz, Corey Feldman, and Corey Haim to name a few. They were all relatively unknown (or in the process of finding their star) at the time of the film’s release, but I think after watching you will definitely agree that they all became successful for a reason. (Especially Kiefer!)

Last, but FAR FROM LEAST, let’s talk about the soundtrack – one of the best selling points for this film, imho. (But I guess this only works if you’re here for the 80s thing, which I. AM.) This soundtrack is one of my absolute all favorite albums in the entire world, and was the first vinyl record I bought with my own money. It is the most 80s an album could be in the best rock ‘n roll way, and again, I just cannot even.

As an experience, this movie really has it all (there’s even romance and brotherly love and a vampire fighting brother duo and an awesome dog (spoiler alert, the dog DOES NOT die)).

OH BUT WAIT, DID YOU REALLY THINK I WAS DONE YET?
Not even close.

I have a feeling that for some of you, knowing the idea that culminated in this cult classic film will make you appreciate the end result even more. Do I have you on tenterhooks yet? No? Ah, well, it was worth a shot. Anyways, back to the story.

The original idea behind the film was that Peter (he of the Pan variety) would be a vampire – as he already has a group of never aging Lost Boys. The actors were all supposed to be much younger, and a lot of the Pan mythology was to be worked into the film (and a lot of names would have carried over – the head vampire would have been Peter, the brothers would have been Michael & John, and their mother would have been Wendy.) As it turned out, after getting a new director the script was rewritten to reflect his request that the actors age be increased, giving the film the possibility to have an edgier, sexier feel. (Thank you, director.) Some of the names were changed (Peter becomes David, John becomes Sam, Wendy becomes Lucy), but the movie did keep one significant reference – the dog is named Nanook in homage to Pan’s Nana. There is still one younger Lost Boy, and his story (albeit very small in the grand scheme of things) is basically perfect.

So there you have it! It’s really just a lot of words all jumbled together to try and explain to you why this movie should absolutely be on your watch list, if you haven’t already seen it, and why there’s no time like the present(ly now time of Halloween) to give it a shot!

Have you ever seen this film? Do you like it as much as I do? If you’ve seen it, did the soundtrack resonate with you the way it did with me?

Thank you for having me on Fortnight of Fright, I’ve so much enjoyed sharing this post!