Happy Friday, all! What an excellent week we have had for Fortnight of Fright! I’ve had so much time reading everyone’s posts and to end the week we have Vyki from On the Shelf to tell us all about a haunted jail. As you guys know I LOVE “real” horror stories, and this one is no exception! Take it away, Vyki!

There are lots of creepy haunted places that come to mind when we think of Halloween, cemeteries, run down factories, old mental hospitals, scary looking old houses, but one of the creepiest I know of in my county is the old jail.  Opened in 1958 right before the original jail was torn down, the metal bars of this jail has seen a lot over the years.  Though it has been updated some though the decades, the cosmetic touch ups can’t hide the creepiness underneath. It is what you think of with a traditional older jail.  Metal bars, clanging doors, dreary cement walls, and graffiti scribbled or etched into every space available.  Those walls have witnessed who knows how many beatings, stabbings, deaths and suicides and it seems like some of those who died still stay within those cells.  Walking down the barred corridors makes you feel like there are several eyes staring at you from the empty cells and you can almost hear the echos of the clang clang clang of inmates running things along the bars.

The most chilling areas of the jail, however, are the solitary cells.  These were the cells where the extremely violent and mental people would go; those who couldn’t play nice with others and lost touch with reality.  These were isolated and dark, with tiny fractured windows, and if you listened hard enough, you could hear the screams of the insane still ringing about.  For a very short time, we had to open the old jail to house some inmates while some renovations were being made to the new jail, and during the stay, both inmates and officers talked of the strange incidences that occurred.  Noises, clanging, footsteps, water running, even a figure passing across the camera monitor that was never there.  Night of course was always the worst times and officers dreaded having to work their third shift in the creeptastic building.  I’ve been to the old jail twice and both times were during the day and even in the light, it gave me the willies.  I think if they were allowed to turn it into a haunted tour for Halloween, it would be the most popular and scariest around!  And I’m certainly glad I never had to be someone working or housed in this heeby jeebies building! 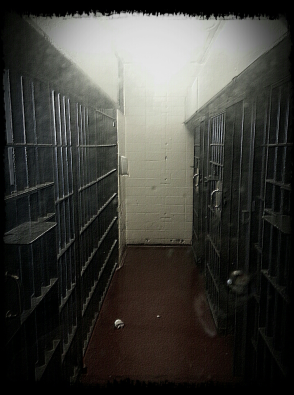 Wow!! I love the whole atmosphere surround this jail, it sounds so intense! Thank you so much for joining us today, Vyki! Readers, don’t forget to head over to Brittany’s blog to see what she has featured today! Happy haunting!