Series Information: Book one in what I believe is a planned series

Recommended For: Readers interested in a novel with a paranormal mystery, slight macabre, cheeky and interesting main characters and yes, those of you who love Sherlock and Doctor Who.

Newly arrived in New Fiddleham, New England, 1892, and in need of a job, Abigail Rook meets R. F. Jackaby, an investigator of the unexplained with a keen eye for the extraordinary–including the ability to see supernatural beings. Abigail has a gift for noticing ordinary but important details, which makes her perfect for the position of Jackaby’s assistant. On her first day, Abigail finds herself in the midst of a thrilling case: A serial killer is on the loose. The police are convinced it’s an ordinary villain, but Jackaby is certain it’s a nonhuman creature, whose existence the police–with the exception of a handsome young detective named Charlie Cane–deny.

Raise your hand if you are annoyed at the way in which books are being described as “The next Game of Thrones,” or “The Hunger Games meets The X-Files,” and so on. *looks around at the plethora of raised hands* Me too. Now, raise your hand at how many of those crossovers have been successfully dubbed “The next Game of Thrones,” or “The Hunger Gams meets The X-Files.” Oh, no one? That’s what I thought. My point is that when I saw Jackaby was being described as “Sherlock meets Doctor Who” my head was screaming “NOOOOOOOO!” while my heart was screaming “PLEASE SIR, MAY I HAVE SOME MORE?!” So in an nutshell, I was wary to pick it up. Well let me tell you, I am so glad that I did, because Jackaby absolutely delivers.

Do you love the quirks of Sherlock? The way in which he finds the so called “ordinary” insanely boring, and the impeccable way in which he can tell where you have been vacationing simply by looking at some loose thread on your coat? How about the way in which The Doctor doesn’t take no for an answer, or his knack for collecting strong and witty companions you can’t help by envy? Take all of these things, add in a bit of the paranormal and you’ve got R.F. Jackaby.

Our mystery was set in New England, which I loved and the novel was narrated by a smart, spunky, and strong young lady, Abigail Rook. Abigail was a gal after my own heart, running away from home, winking at little old ladies looking down their noses at her, catching the eye of a handsome detective…yep, sounds like me! The secondary characters were also superb, though I felt as if I didn’t get enough of them. I sincerely hope that with more novels comes more backstory on Charlie, Jenny, and Douglas! Although I figured out the big twist early on in the novel, I still found it enjoyable to see how it played out and was not at all disappointed.

To give you some insight into how fantastic this character (and obviously, author) is, take a glimpse at some of our twitter chats.. 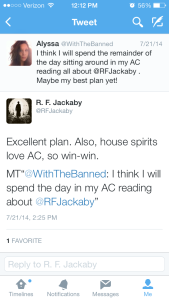 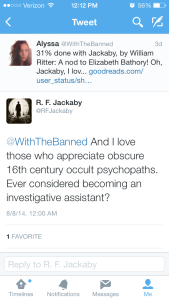 Isn’t that just the most fun? It really added to my enjoyment of the book and you guys, it shouldn’t be surprising to you that I think I have a little bit of a crush on R.F. Jackaby.

Shelf Talker: Jackaby was absolutely everything that I wanted it to be, it was fast paced, and funny, with the perfect amount of mystery and macabre. I read it in nearly one sitting and eagerly anticipate much more from this quirky character.