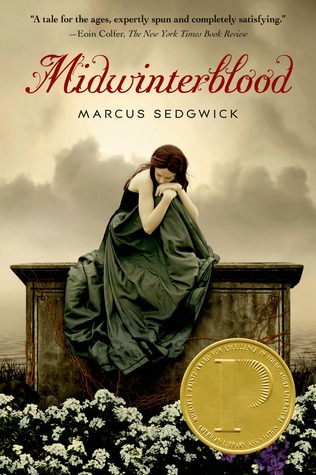 Recommended For: Fans of books that make you think, and love that moves beyond time.

Related Reviews: Amy’s post on the many moons of Midwinterblood, and Brittany’s review

Have you ever had the feeling that you’ve lived another life? Been somewhere that has felt totally familiar, even though you’ve never been there before, or felt that you know someone well, even though you are meeting them for the first time? It happens. In 2073 on the remote and secretive island of Blessed, where rumor has it that no one ages and no children are born, a visiting journalist, Eric Seven, and a young local woman known as Merle are ritually slain. Their deaths echo a moment ten centuries before, when, in the dark of the moon, a king was slain, tragically torn from his queen. Their souls search to be reunited, and as mother and son, artist and child, forbidden lovers, victims of a vampire they come close to finding what they’ve lost. In a novel comprising seven parts, each influenced by a moon – the flower moon, the harvest moon, the hunter’s moon, the blood moon – this is the story of Eric and Merle whose souls have been searching for each other since their untimely parting.

“It’s not even as if she is beautiful, not in the way people usually mean. She’s more than pretty, that’s what he can say, but it’s not that that has caught him. It is simply her face, her eyes. The moment he saw them something clicked. He suddenly realized what it was. He recognized her face. As if seeing an old friend, long forgotten…”

Okay, so you read the blurb right? You get the gist? Two people are slain and it echoes multiple lives they have lived together, moments where they keep finding and losing one another as time passes…deep stuff. This was a hard book for me to read for many reasons, almost all of them personal, but I read it and honestly am not sure that I can put into words how deeply it affected me. As you know we Gals on the Same Page write non-traditional reviews for this feature, but what I am going to do is try and put into words why this book affected me on such a personal level. We are about to get a little personal!

First, it is imperative to let you know that a few years ago someone close to me was murdered. As you can imagine this sort of thing affects you for the rest of your life, it is something that absolutely changes the way you view the world and there isn’t a day that goes by that it doesn’t affect me in some way. Second, I should explain to you that I am not a religious person. This is an understatement, believe me, but I believe “to each their own,” and therefore won’t get into my reasons or debates. Well it is no question that when my friend was killed I quickly spiraled down into a very dark place, I obsessed over the trial and hate and pain consumed me and I found it hard to even be around other people. One day I was at work making a cup of coffee and I just couldn’t stop thinking about the trial and about my friend. I hadn’t told anyone what had happened at work but my co-worker came into the break room, looked up at me and said, “Alyssa, Matt wants you to stop reading the articles, you are going to be stuck in the dark.” I felt like the world came crashing down in the at moment all over again. I just started sobbing and somehow managed to ask her “how” and “why” she was doing this to me. To make a long story short, this woman was a Psychic Medium who specialized in past life experiences. I know some of you are probably going to stop reading here due to disbelief and bias, and that is totally fine, this is a no judgment zone. I am not going to get into details about what this woman told me, except that I will tell you that she said we have traveled many lifetimes together, each time missing the mark where we can be together, each time he was lost to tragedy in order to move us forward toward an unknown goal. I am not going to explain to you how she helped me bridge a gap that I so desperately needed and how she gave me something to believe in again. I am just going to tell you that it forever changed me, and though I may not believe 100% in anything, I believe that anything is possible and I believe that everything happens for a reason. END_OF_DOCUMENT_TOKEN_TO_BE_REPLACED