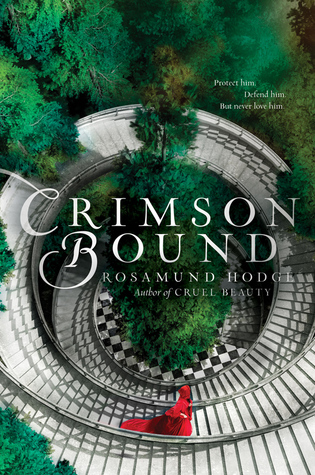 Source: Received an ARC from the publisher for review

Recommended For: I don’t know, fans of dark fantasies who don’t have high expectations I guess

I am going to mark spoilers as clearly as I can, but for those of you who are planning on reading Crimson Bound, you might wanna avert your eyes until after you finish. Then come back and let’s discuss!

A few things to note before reading this review…First, Crimson Bound was one of my most anticipated reads this year. Second, Crimson Bound is NOT at all part of the Cruel Beauty world; it is not a sequel or companion and has nothing to do with the author’s first book. Third, I am pretty easy to please, and rarely DNF books. I do not generally have an issue with love triangles and am not one who tears apart books due to unrealistic standards. I was an English major in college and it was necessary to critique in that way while reading so now that I have the time to read for pleasure that is exactly what I do – I am not here to be a critic. Finally, with all of that being said, I have to tell you that I did not enjoy Crimson Bound. In fact, I not only didn’t enjoy the novel, but I was angry over my disappointment upon completion. To sum up…

But, let me explain…

Crimson Bound starts off strong, Rachelle is attacked in the forest (basically the only allusion to Little Red Riding Hood to be found in the novel) by a “forestborn” who marks her and leads her to make a choice that will bound her to him and The Devourer (our villain, he isn’t really fleshed out so?) forever. Race forward a few years and Rachelle is living with her choice, doing all that she can to fight for her (for lack of a better word) soul and save the world from the Devourer. She is doing so by the side of her best friend, Erec. Erec is made to be strong, unforgiving and extremely charming. In fact, Rachelle spends much time in the novel thinking about how he is a womanizer but is still oh so dreamy that she can hardly contain the stirrings in her loins. Admittedly, I liked Erec. He was definitely harsh, but he knew what he wanted and went for it and also seems to be quite a good kisser as the only swoony moments had to do with him and his ego. So as I said, the beginning of the novel was decent. There are many action packed moments and our main character Rachelle seems like she is strong and likable. Also there is a very strong “character” to be found in The Forest which often comes alive in response to The Devourer “waking,” and any novel that puts so much emphasis on a forest is okay in my book.

Then…things started to change in Crimson Bound. This novel that held such promise, and strength started to fall apart (much like the main character) at the introduction of the king’s bastard son, Armand. Armand is thought to be a Saint, as he went up against a forestborn and survived – though he lost his hands and thus lives as a martyr every day. The easiest way for me to describe Armand to you is for me to do what Rachelle did and compare him to Erec. You see, Armand was kind, and filled with the sunshine that Rachelle so needed for her soul. While Erec, oh Erec played to that dark side of her, the side that was wakened when she went up against the forestborn in the first place. Thus begins the dumbest love triangle ever and basically the reason that Rachelle spends A LOT of time putting herself down, thinking herself unworthy of Armand. Who, by the way, she was saying that she LOVED not long after meeting (and hello familiar trope) HATING him. Rachelle, who is a bad ass fighter and is strong in her convictions, falls apart when Armand (apparently) betrays her. In order to feel better about herself she lowers herself by sleeping with Erec. Yeah, you read that correctly. She goes to find Erec to “forget” what Armand did because she thinks that she is only worthy of being Erec’s mistress. This made me so angry. First of all, why is this strong woman falling apart like this over a man to where she actually thinks that she DESERVES to be with someone who hadn’t made her a priority up to that point, and when she was made a priority it is only as a piece of property. In fact, Erec stated multiple times that she belonged to him and that he wouldn’t give her up without a fight. YOU BELONG TO NO ONE, RACHELLE!! NO ONE BUT YOURSELF!!

Then throw in this whole religious aspect where The Bishop is preaching about renouncing The Devourer, and so on. Which only made me think that the author was trying to force the novel into this mold that didn’t fit, and it didn’t sit well with me. If the Bishop is preaching the will of God, and going against The Devourer, does that make The Devourer the stand in for Satan? Why is this religion taking up so much plot and reasoning for my character’s actions in my short young adult novel that has no time to give much explanation to the dynamics of the religion? Stop it. Then the ending, this is where it is going to get spoiler-y folks so look away…Rachelle finds out that Erec – you know the dude who she has such strong feelings for that she lowered herself to sleep with – is actually the forestborn from the beginning who first marked her AND the same forestborn who Armand went up against who took his hands. Erec confesses that he loves her and wants her to RULE with him (I mean every trope imaginable, this novel falls into, honestly). She obviously hates him and decides that she is going to sacrifice herself to The Devourer to wait for it…SAVE ARMAND! So she goes to The Dark Forest by sacrificing herself and of course Erec is there and they have a nice chat and he confesses his “love” and then as they are getting away from The Devourer he decides that he doesn’t want to go back to the real world and life in exile, or chains, or whatever so HAHA he SACRFICES HIMSELF TO THE DEVOURER – not to be confused with Rachelle who attempted to sacrifice herself for another, he is doing this to take his fate into his own hands. So, obviously she succeeds and comes back to life where she is no longer a forestborn but a mere human, and then she and Armand have an awkward few weeks together where they barely speak. Then within the last few pages of the novel she thinks she sees the forest come alive again and cries and realizes how bad she feels for Erec because he isn’t really dead he is just been devoured (hehe) by The Devourer so still lives in his stomach or something and what a horrible way to go?? Then Armand finds her and awkwardly tells her that he doesn’t want her to leave his side and they have sunshine and a kiss and BOOM it’s over.  What. / end spoilers

To sum up, I was pretty disappointed in this novel. I had the highest expectations and perhaps that is where I went wrong. To be fair, many people who have read Crimson Bound really enjoyed it so make your own judgments!