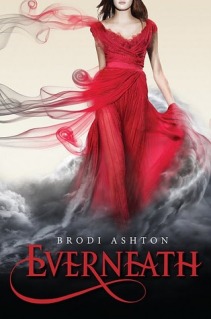 Series information: Book one in the Everneath trilogy

Last spring, Nikki Beckett vanished, sucked into an underworld known as the Everneath, where immortals Feed on the emotions of despairing humans. Now she’s returned- to her old life, her family, her friends- before being banished back to the underworld… this time forever.

She has six months before the Everneath comes to claim her, six months for good-byes she can’t find the words for, six months to find redemption, if it exists.

Nikki longs to spend these months reconnecting with her boyfriend, Jack, the one person she loves more than anything. But there’s a problem: Cole, the smoldering immortal who first enticed her to the Everneath, has followed Nikki to the mortal world. And he’ll do whatever it takes to bring her back- this time as his queen.

As Nikki’s time grows short and her relationships begin slipping from her grasp, she’s forced to make the hardest decision of her life: find a way to cheat fate and remain on the Surface with Jack or return to the Everneath and become Cole’s Queen

Nikki Beckett has returned after she has been presumably missing for six months. She hasn’t been in rehab or away on some drug binge, but in the Everneath where her six months away has been equal to one hundred years. Nikki went to the Everneath with Cole when she believed she had no other options left to her. Unlike every other person who has gone to the Feed, Nikki didn’t fade away. She remembers her life from above, but most importantly, she remembers Jack. She decides to go back to Jack, to try to make amends with her family and say goodbye properly before the Tunnels come for her. That is her destiny, to become a battery to the Everneath or to become an Everliving next to Cole as his queen. Unfortunately, as Cole’s queen, Nikki would have to feed off of people as he does and she refuses to do so. As time progresses she decides that these options don’t suit her and therefore she takes her fate into her own hands.

I really enjoyed Everneath, the Hades and Persephone myth has been done a few times and though it is one of my favorite myths I was getting a little sick of it. This book was a different kind of retelling where I didn’t find myself figuring out exactly what was going to happen next.

The characters were a good mix of personalities and though I had a hard time accepting some of the behaviors of certain characters I thought they worked well together. I honestly had a very hard time understanding why Nikki was so in love with Jack. They did go a bit into their back-story but it didn’t completely “click” with me, there seemed to be constant doubt on Nikki’s part and considering he was the sole reason she was able to hang on during the feed it seemed a little confusing. It may be that I am outgrowing the YA romances (gasp!) but I still wanted more from their relationship.

Overall I really liked Everneath, I believe I will continue with the series since the ending of this book was very interesting to me and I recommend it to those who enjoy Greek Mythology and retellings. Originally I was going to recommend it to fans of Goddess Interrupted and Fury but there seems to be a great divide between these fans, as they either love Fury or Everneath. Ironically, I was not particularly a Fury fan, and I enjoyed Everneath very much.

One thought on “Review: Everneath by Brodi Ashton”