Recommended For: Lovers of dark and paranormal fantasy

In a city of daimons, rigid class lines separate the powerful from the power-hungry. And at the heart of The City is the Carnival of Souls, where both murder and pleasure are offered up for sale. Once in a generation, the carnival hosts a deadly competition that allows every daimon a chance to join the ruling elite. Without the competition, Aya and Kaleb would both face bleak futures–if for different reasons. For each of them, fighting to the death is the only way to try to live. (Via Goodreads)

Carnival of Souls is unique in the way it is told in three different points of view, from Mallory, Kaleb and Ava…

Mallory is anything but normal; her life isn’t too stable as she is constantly moving from town to town with her adoptive father, Adam. Adam is a witch and is on the run from the daimons because he stole something from them long ago, and their leader would do almost anything to obtain what has been lost to him. It is the constant vigilance of Adam and Mallory that has kept them alive and safe for so many years. Mallory obeys her father’s wishes and doesn’t get too close to anyone, knowing that she won’t be able to spend much time around them anyway. However, things change quickly for Mallory when she meets Kaleb. She is instantly drawn to him and finds him intriguing in a way that she has never felt before. However, she does her best to resist getting to know him because she believes him to be human and knows she can’t risk him by drawing him into her chaotic life.

The Carnival of Souls takes place in The City and occurs once in every generation. It consists of fights to the death between daimons, and the prize is a raise in the caste, and a chance to join the ruling class.

Kaleb is not at all what he seems to Mallory, he is a lower caste daimon and is one who wears a black mask. The black mask sets him apart and showcases his skills as a fighter and a killer. It are these skills that lead him to be hired to find Mallory for an upper caste daimon. It comes as a surprise to Kaleb when he is drawn to Mallory in a way that he had never imagined, she immediately becomes “pack” to him, and you die to protect those in your pack.

Ava is also a daimon in The City. Though unlike Kaleb, she is part of the upper class. Ava chooses to compete in The Carnival of Souls for a different reason than to raise her status. Instead, she fights to win her freedom – the freedom to choose her own future. Female daimons in the upper caste are forced to marry and breed, and Ava would rather die.

At first the relationship between Mallory and Kaleb seemed to lean toward the insta-love we find in many paranormal romances. However, Marr made me believe in it in a way I have been unable to in the past. The moment Kaleb described Mallory as pack was the moment I believed fully in their relationship and began to become invested in their reliance on one another as a couple. I also became very interested in Mallory’s growth through the novel, Adam keeps many secrets from her and though she is physically stronger than most females her age, she begins as a very naïve character. She grew fabulously throughout the novel, and by the last paragraph I was metaphorically giving her a high five. I enjoyed the vastly different emotions I felt toward both Mallory and Ava, where Mallory had to grow on me, I loved the strength behind Ava and her utter devotion to fight for herself. I felt angst and sorrow over her decisions because she had no choice but to fight for herself.

“They were pack. She was meant to be in his life, and now that he knew it, there was nothing he wouldn’t do for her.”

Melissa Marr again delivered a world that I cannot stop thinking about; I loved the darkness and the blurred lines between good and evil. The caste system, the masks, and their representation throughout The City provided amazing imagery that I had no trouble picturing in my mind.

Carnival of Souls was fantastic and delightfully dark. I felt a deep connection to each of the characters and thought the relationships to be intricate and overly exciting. The plot of this novel is fast paced and I devoured it, desperately needing to find out what was going to happen next. I am eagerly anticipating book two in this series, I can’t wait to see who will excel in fighting for what they believe in.

Extra: I was lucky enough to meet Melissa Marr at BEA – and not to brag, but she totally hugged me – and she was so incredibly nice and just..well…awesome! She also signed my book (with what I think is the best signature ever): 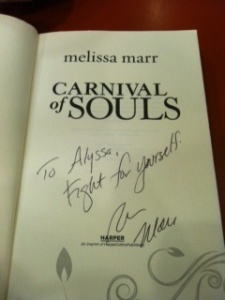 Thank you so much for the ARC, Melissa (and HarperCollins), I doubt I was able to express my gratitude and love for this novel in this short post. In a nutshell: you rock!

4 thoughts on “Review: Carnival of Souls by Melissa Marr”