So I saw Neil Gaiman this year. Twice. That’s right twice; weeks apart from one another and mostly in promotion for his new book The Ocean at the End of the Lane. I know, it isn’t too crazy when you take into account that I often exclaim “Oh my Gaiman!” in lieu of other Godly beings. It isn’t crazy, no, but it was slightly overwhelming for the senses. In the sense that, though I saw him over a month ago I am just now able to come down and let you all in on my FEELINGS about the whole thing…I will do my best to recap the two events and drop some blurbs here and there from Mr. Gaiman throughout :]

“I wrote this book accidentally. It started because I missed my wife, and I wanted her to see the world through my eyes when I was seven….I don’t do feelings…because I’m English…and I’m male.”

First, there was the event at Book Expo America when I got to listen to him speak about why fiction is dangerous. Without being a bore, let me quickly walk you through it…in a nutshell: my morning was insane. We missed our train and then had PROBLEMS ON THE TRACKS mere weeks after the whole train crash debacle, and I literally RAN into Javits hoping beyond hope that I hadn’t missed my chance to hear Neil speak. My dear friends Heidi and Asheley saved a seat for me and I was so giddy from anticipation that when Neil came out, I cried real tears. The absolute awe I felt was entirely too much to handle. You see, this is the voice that got me through some incredibly rough times. The voice that allowed me to gain enough courage to drive through rush hour for the first time without becoming so frozen with fear that I had to pull over until my panic attack subsided. Reality hit and I became so overwhelmed with gratitude and utter happiness that I couldn’t contain myself.

“Kids don’t need to be told what it’s like to be kids, they’re already there! It’s the adults who forget…”

Some quick things to note about Mr. Gaiman, he is a genius with words, and he is hilarious. Make you laugh out loud, hilarious. For example, when asked if he would ever consider another career, perhaps as a “hot librarian,” he answered that, “Hot librarians are apart from anything else, a very different gender than me…but yeah, the two professions that I fantasized about, that I could actually imagine wanting when I was a kid growing up were an English teacher and a librarian. They were the people that I loved and respected and the things that I was good at…well, I didn’t know that I would be good at being an English teacher or a librarian..BUT…when I was seven, all of my books…alphabetical order. The amount of worry I gave to Roger Lancelyn Green, over whether that man belonged in the L’s or the G’s…WHAT. What are you Roger Lancelyn Green?! Why are you writing these books and tales of the norsemen? Why can’t you just be Roger Green, or Roger Lancelyn, then I would know where to put you. Well, I put him in the L’s, and later discovered I was wrong!” 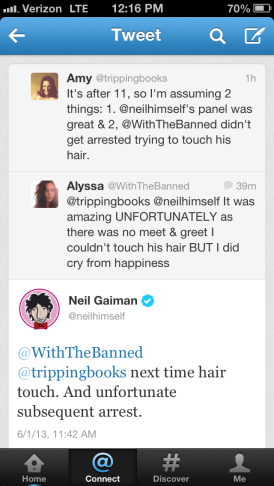 and my life was basically made…

“We don’t think of ourselves as names. I don’t walk around saying, oh look at what I am doing in my Neil Gaiman way!”

Then just three weeks later I drove three hours to Saratoga Springs to listen to Neil speak again, and this time I got to meet him. To be honest it is nearly impossible for me to explain what it feels like to meet someone so incredible and important. If you haven’t experienced it, I really can’t put the feeling into words. Basically, I listened to the wonderful man speak about his new book, and he read bits of it to us in which the beau, who drove 3 hours  just to watch me react to my favorite author speak, became an instant Neil Gaiman fan. True story – he has gone through my entire Gaiman library at this point and is starting on the audiobooks. Then, and this is the best part, I got to actually meet Neil and tell him how amazing I think he is, TO HIS FACE. As you see in the picture above, there is an ongoing joke between my friend Amy and I that I want to touch Neil’s hair, and I had every intention of reminding Neil of that tweet and informing him that I am not the kind of gal who just goes around touching people’s hair, but it didn’t all go according to plan.. 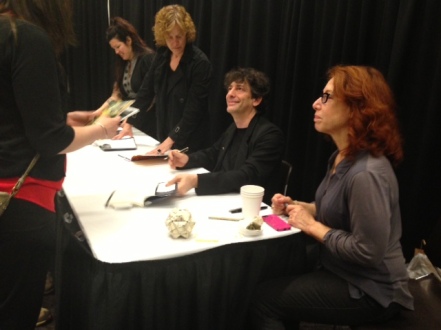 Looking up and smiling, politely ignoring my flails.

Alyssa waiting in line: *bounces up and down* *makes girly noises*

Alyssa still waiting in line, 3 hours later: “OMG I can see him, he is right there * points * I promise I won’t cry!”

Nice woman assisting Neil with the signing: “You wouldn’t be the first one who has.”

Neil Gaiman: “Hello, thank you so much for waiting!” *smiles in his Neil Gaiman way*

* Neil Gaiman is handed The Sandman: Dream Country to be personalized *

Alyssa: IT’S BECAUSE I LOVE THE CHARACTER OF PUCK. HE IS MY FAVORITE CHARACTER IN LITERATURE!! (The beau says I did not yell at Neil Gaiman but in my memory I surely was not using an indoor voice.)

Neil Gaiman: *looks up and smiles* “Thank you so much for saying that, I enjoy him as well!”

Alyssa: *GASP* “Thank you, thank you so much for being you. OMG. Thank you!” *floats out of signing room*

So yeah, overwhelming. He looked so tired and was still so charming and gracious, I could barely handle it. Then I drove the three hours home, while listening to the Evelyn, Evelyn CD we were given at the event, and became an immediate Amanda Palmer fan, so there’s that.

“How many secrets can you keep in your hair, and is that where the metaphors come from?”

To sum up, go hear Neil Gaiman speak at your earliest opportunity, it is an absolutely fantastic experience that I can hardly put into words. Oh and read ALL THE GAIMAN BOOKS. No, seriously.

Neil Gaiman, I Love You

8 thoughts on “Event Recap: Or, How I Met Neil Gaiman and Didn’t Touch His Hair”