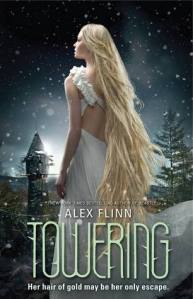 Publishing Information: May 14, 2013 by HarperTeen

Recommended For: Fans of quick reads filled with a little bit of mystery, and a lot of insta-love
Rachel is trapped in a tower, held hostage by a woman she’s always called Mama. Her golden hair is growing rapidly, and to pass the time, she watches the snow fall and sings songs from her childhood, hoping someone, anyone, will hear her.

Wyatt needs time to reflect or, better yet, forget about what happened to his best friend, Tyler. That’s why he’s been shipped off to the Adirondacks in the dead of winter to live with the oldest lady in town. Either that, or no one he knows ever wants to see him again.

Dani disappeared seventeen years ago without a trace, but she left behind a journal that’s never been read, not even by her overbearing mother…until now.

It’s hard to tell you how I feel about this novel because while I was reading it I really enjoyed it. However, now that I am looking back to write my review I am thinking of all of the things that I didn’t particularly enjoy. Does that ever happen to you? You read a book and you’re entertained at the moment but then looking back you find that it wasn’t a particularly good book? It’s hard to rate a book like that, but I’ll do my best.

The POV in the novel goes back and forth between Wyatt and Rachel, though much time is spent in Wyatt’s head as Rachel really doesn’t have much going on up in that tower. I liked Wyatt a lot, I found him endearing and gentle and a little bit sad. Rachel was a decent enough character as her naivete is believable due to her circumstances and her reliance on her “Mama” is necessary for her continued survival. I like Wyatt’s curiosity and strength, and I enjoyed the way Rachel took control of her own life when she felt the need, even though it did seem rather forced. However, I did not like the instalove between these two, and despite the fantastical elements that went into their meeting, it didn’t click for me and I was annoyed at how quickly and deeply they fell in love. The secondary characters in the novel were scarce and the villains fell very flat. In fact, the only time we really see the villains in depth is during the climax of the novel, and that was a disappointment as I really felt that so much more could have been done with their characterization.

My absolute favorite part of the novel was the mystery and setting. It read like one of those old school mysteries, teenage daughter goes missing, ghost starts haunting the new boy in town, mysterious singing, deep snow and wind reminiscent of the moors of Wuthering Heights. Sounds awesome, right? It really could have been, had it contained more detail and depth. On a whole, there was one interesting part that I honestly did not see coming, and there were times that I couldn’t stop thinking about the plot and even while I wasn’t reading, I was wondering what was going to happen next. I think that was the biggest disappointment for me. Once the novel climaxed, and the mystery was solved, I couldn’t help but feel let down. It wasn’t just that things were solved too quickly, though that was an issue for me, it was my disappointment in the flatness of the tale.  The BIG REVEAL happened and tied up ALL THE THINGS and Rachel saved the day (and her man) with her MAGIC and all was well!

The gist here is that before I started, and as I was reading, what I thought I was getting was an incredibly layered, detailed, and intriguing mystery. What I got was a rather typical young adult novel filled with enough magic to tie up all loose ends, and an insta-love between a troubled boy who would have a lot going for him if he hadn’t fallen so in love that he now has a live in girlfriend who doesn’t know the difference between a car and a carriage.

For those of you who are looking for a quick read to cleanse the palate in between those layered and detailed novels, give this one a go. It was enjoyable enough, but I won’t be running to read the author’s other novels any time soon.